View cart “‘Nun Massacre’ Novelization #2” has been added to your cart.

You’ve played the game, now read the book! The second novelization in Puppet Combo’s VHS Terrors Series: Nun Massacre, puts you right in the middle of a classic 80s SLASHER!

Dawn and her friends have just graduated high school and are celebrating with one last party. But this is no ordinary shindig — Barbara has convinced everyone to make the trip to St. Cecelia’s Preparatory School, where decades earlier all the students and nuns were slaughtered. They have beer, a record player, and their whole lives ahead of them. It should have been the perfect night.

But what Dawn and her friends don’t know is that something still stalks the halls of St. Cecelia’s. Something that doesn’t like having visitors. Soon after they arrive, the bodies start piling up. As their last hurrah becomes a fight for survival, the teens are forced to reckon with the monster responsible for the original massacre — and the monsters they have become as the night wears on. Who will make it out alive?

Welcome to the PUPPET COMBO store! 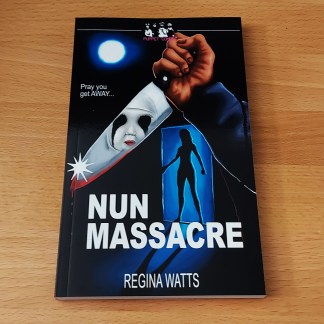